Belgian rioters attacked the king’s car with the monarch inside in violent unrest in Brussels over the death of a black man in police custody who was arrested for breaking the country’s strict coronavirus rules.

King Phillipe was travelling to the Palace of Laeken, his official residence, as protesters began to batter his BMW with projectiles. The vehicle quickly sped off guarded by the king’s security detail.

More than 500 protesters, some of them holding Black Lives Matter signs, gathered in Belgium’s capital on Wednesday following the death of the 23-year-old Ibrahima Barrie.

Barrie was arrested by police on Saturday in the city for breaking the limit on gatherings of more than four people outdoors. The city also has a strict 10pm curfew as part of restrictions that have brought the country’s coronavirus rate under control after it soared in November.

The man was taken to a police station where officers claim he fainted, and then transferred to a hospital, where he was pronounced dead, the office said.

Justice Minister Vincent Van Quickenborne said on Twitter that police have ‘arrested more than 100 people,’ while a police spokeswoman said that ‘several’ arrests had been made.

Pictures from the scene of the riots near the Gare du Nord station showed King Phillipe’s car being hit by rocks and other projectiles as it drove through the area.

A police station was also set on fire by rioters throwing Molotov cocktails, with a video showing the building engulfed in flames. Other pictures showed fires had been lit in the streets of the city.

The car of Belgium’s King Phillipe (pictured, recognisable by it’s ‘1’ number plate) was attacked by protesters as it drove through the area. His security detail jumped into action to protect the car as people had been throwing objects at police 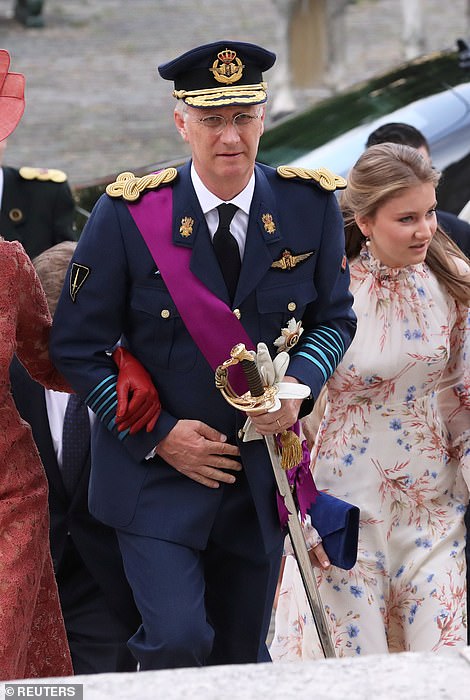 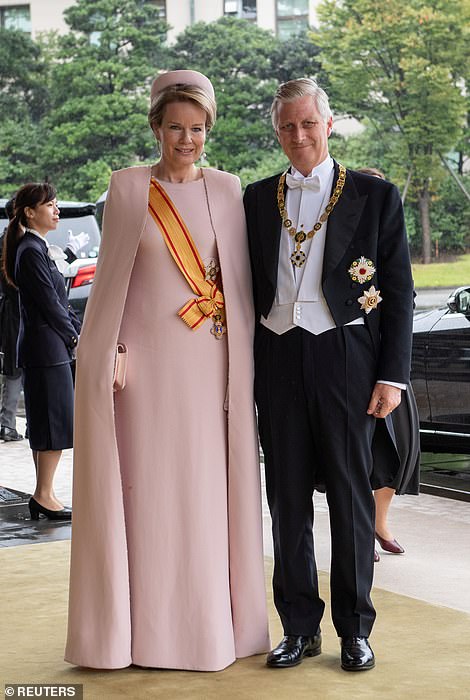 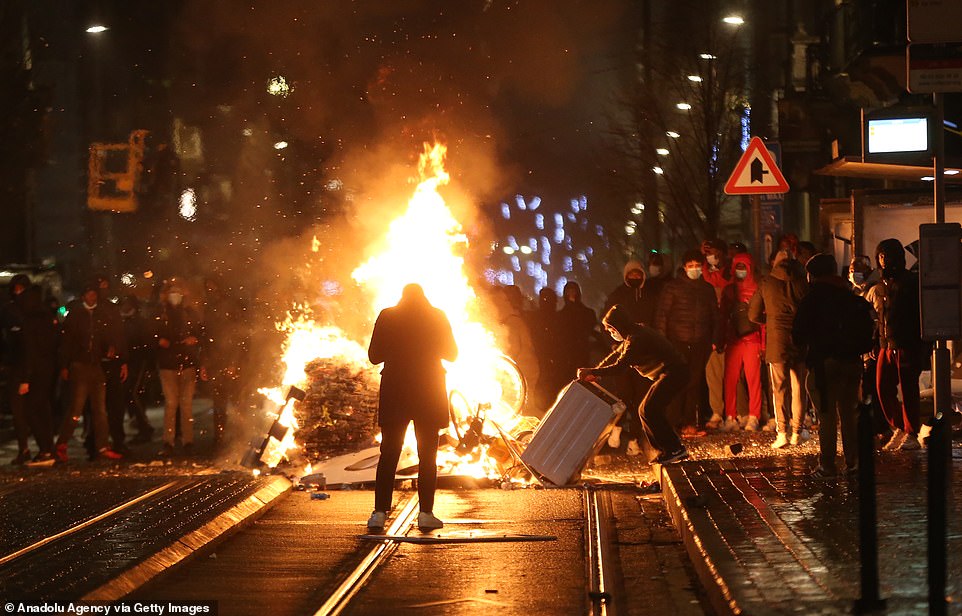 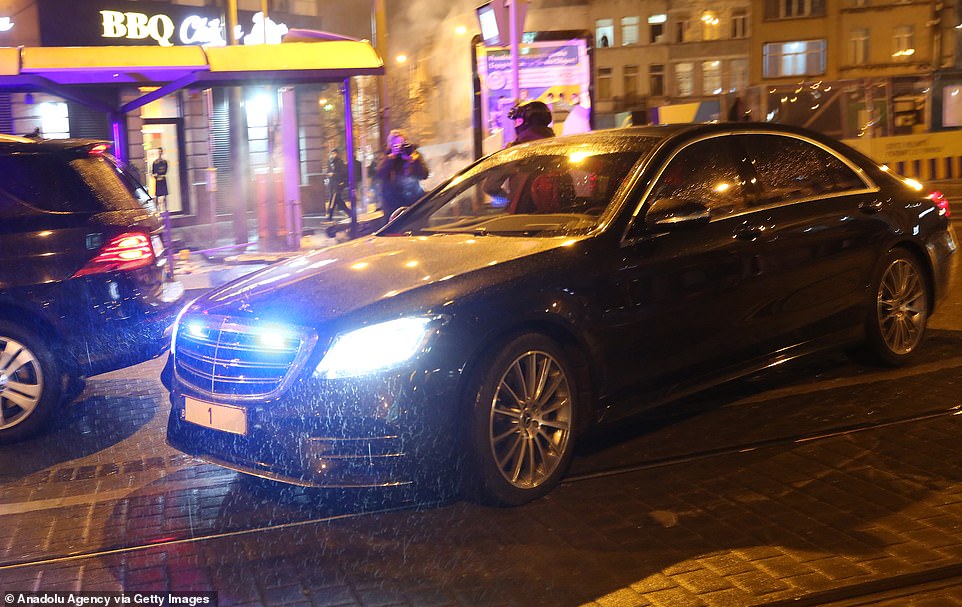 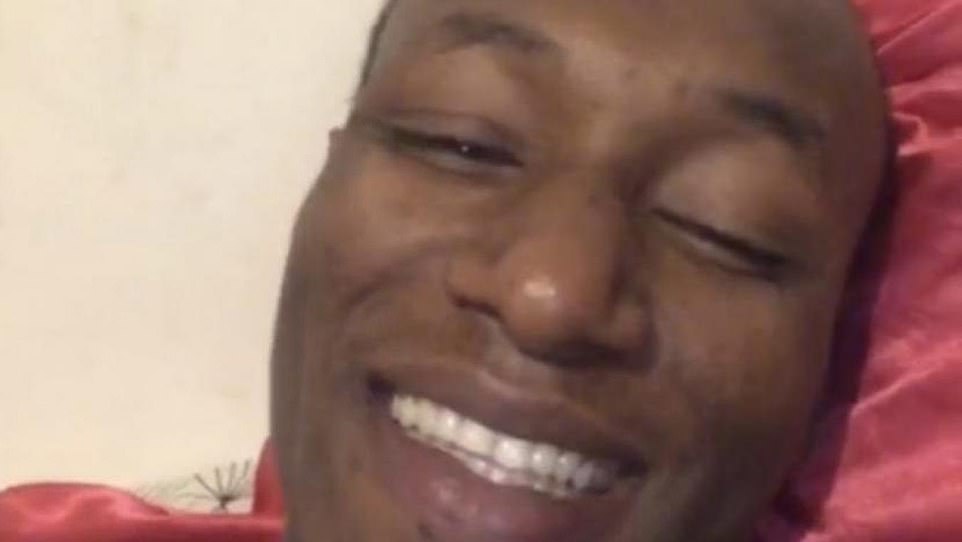 The 23-year-old man who died in custody was publicly identified only with the initials I.B, with some Belgian media reporting his name was Ibrahima Barrie (pictured) 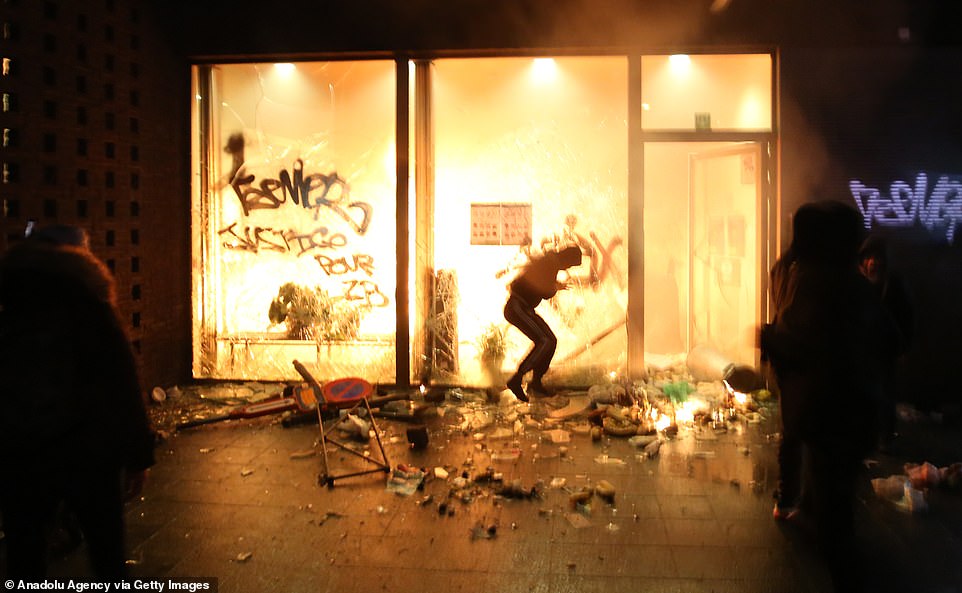 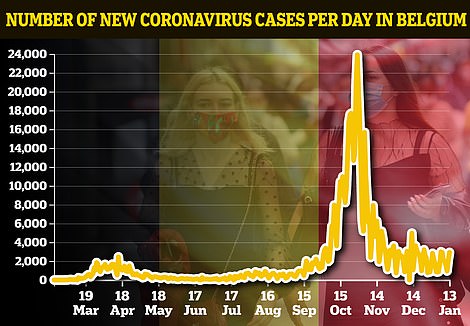 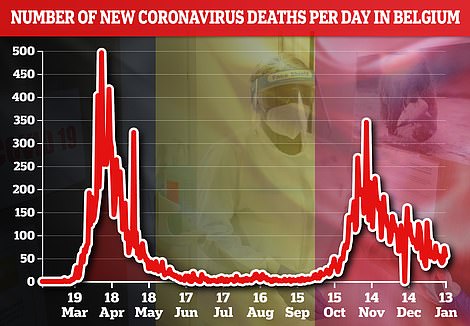 Pictured: Graphs showing number of new coronavirus cases (left) and deaths (right) per day in Belgium. Belgium is the country with the highest number of deaths compared to population, with 175 fatalities per 100,000 inhabitants, followed by Slovenia with 148, Bosnia-Herzegovina with 134, Italy 133, and Czech Republic 129 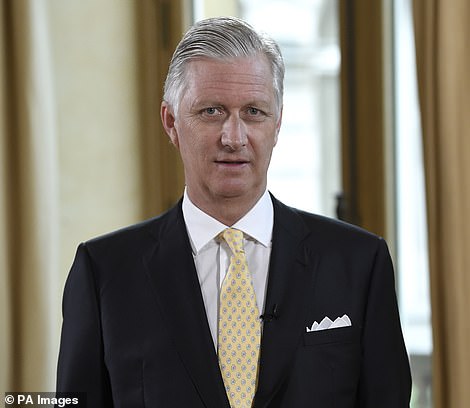 King Phillipe (pictured) was travelling from his workplace in Brussels to the Palace of Laeken, his official residence, when the car was caught up in the riots

While the demonstration began peacefully, with speeches given by Barrie’s family and their lawyer from around 4 p.m. local time, the atmosphere soon changed.

Stones, fireworks and other objects were thrown at police responding to the group, with protesters shouting ‘police, murderers’.

As rioting escalated, local news station HLN reported that the king’s car – Recognisable by the ‘1’ number plate – ‘suddenly appeared in the vicinity’.

Protesters are said to have thrown objects at the car, before the king’s security detail took action to get the vehicle away from the rioters.

The EPA news agency said that the king was travelling from his workplace in Brussels to the Palace of Laeken, his official residence.

Four people including two minors remain in custody after scores were arrested during a demonstration in Brussels over the death of a young black man who had been detained by police.

A spokesman for the prosecutor’s office said three were suspected of arson. The fourth has been accused of rebellion following the Wednesday demonstration, when police made more than 100 arrests.

Officers said most of violence took place after a largely peaceful demonstration on Wednesday of about 500 protesters – some holding Black Lives Matter signs – ended in central Brussels.

‘A group of demonstrators (50-100 people) remained on the spot and caused various incidents and degradations,’ police said, adding that several officers were injured in the clashes.

According to a police statement, protesters threw projectiles, set fires, damaged street furniture and police vehicles. They also smashed a window and a door at a police station.

In all, 116 people were arrested, including 30 minors, and one protester was tended to by ambulance services, police said. A 17-year-old is said to have been injured after being hit by a police baton.

‘Justice must bring to court those who have vandalised and have injured five policemen, including a policewoman who is hospitalised,’ federal police captain Marc De Mesmaeker told broadcaster RTBF on Thursday.

‘This must be done with care, just as the other aspect of the event, the tragic death of Ibrahima, must be treated with care.’ 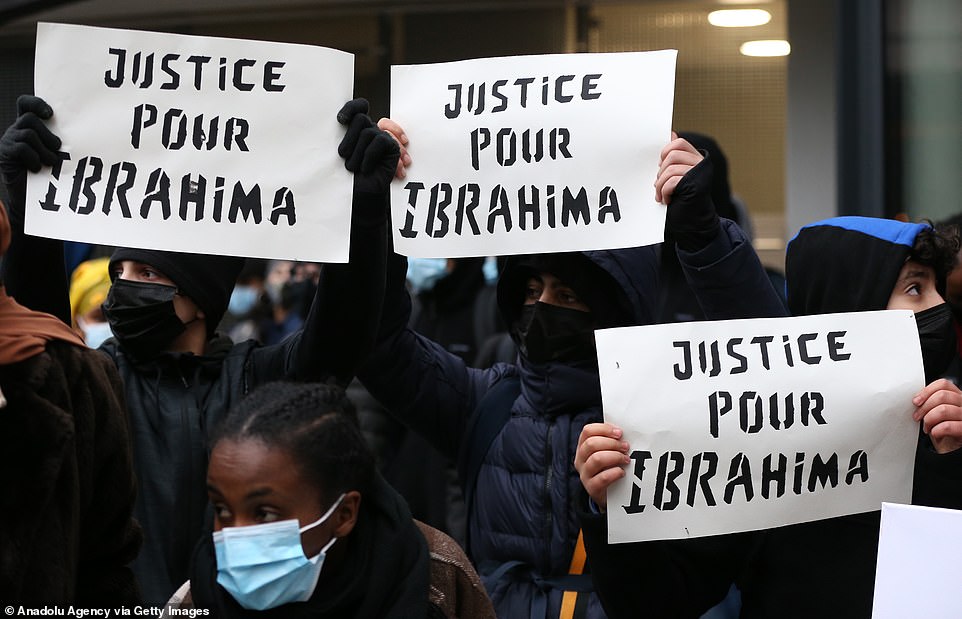 Protesters demanded authorities shed light on the circumstances surrounding the man’s death on Saturday night. Pictured: Hundreds of demonstrators gather around ‘Gare du Nord’ during a demonstration, some holding signs that said ‘justice for Ibrahima’ (pictured) 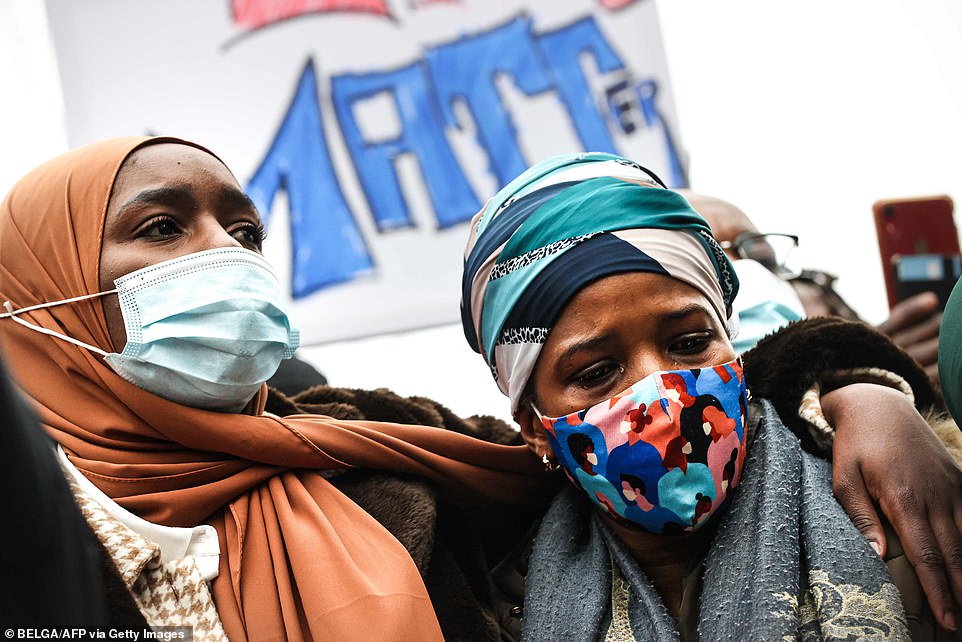 Ibrahima B’s mother (R) takes part in a demonstration on January 13, 2021 outside the police station in Brussels where her son was being held when he collapsed 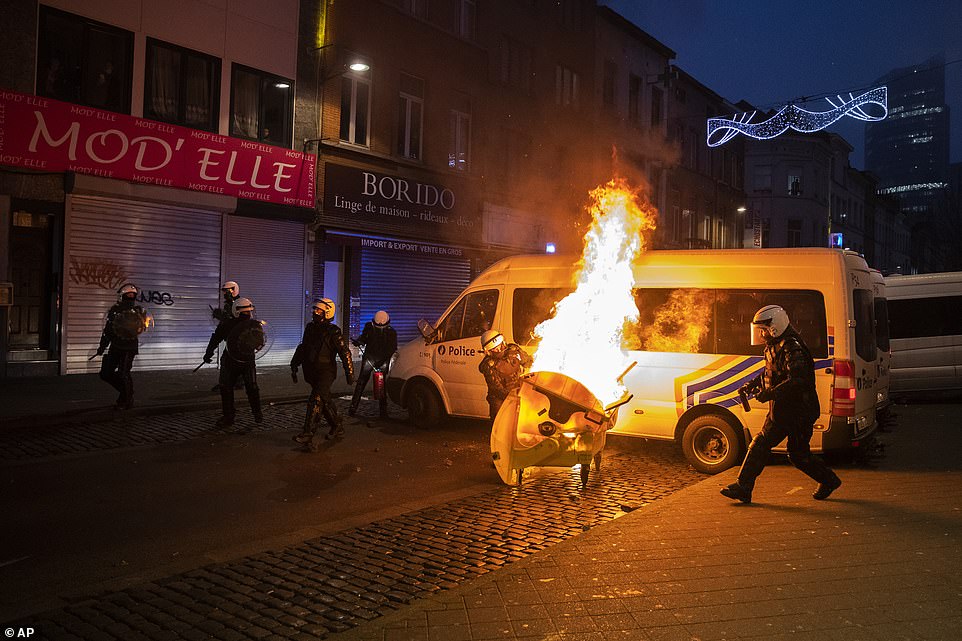 Police officers try to extinguish a fire set in a dumpster in the Belgium capital, Brussels, on Wednesday, amid violent clashes that have seen over 100 people arrested, officials said

Protesters demanded authorities shed light on the circumstances surrounding the man’s death on Saturday night, and that an investigative judge be appointed.

The Brussels prosecutor’s office announced on Wednesday that it was requesting the appointment of an investigative judge following the man death.

Barrie was arrested after he allegedly tried to run away from police officers checking a group of people gathered in downtown Brussels despite COVID-19 measures restricting social gatherings, the prosecutor’s office said.

He was taken to a police station where he fainted and then transferred to a hospital, where he was pronounced dead at 20:22 local time, the office said.

Speaking at a rally on Wednesday outside the police station, the lawyer for Barrie’s family claimed that an initial autopsy showed the man died of a heart attack.

Attorney Alexis Deswaef also accused the police of acting too slowly when Barrie collapsed in their custody.

‘It took between five and seven minutes for someone to act,’ he said. ‘They should have helped him because as long as Ibrahima was deprived of his freedom, the police were responsible for him.’

Initial findings by the toxicologist also said that there was nothing to suggest he had used drugs before his death, HLN reported, but added that he was found with three ecstasy pills on his possession. Official findings are yet to be released. 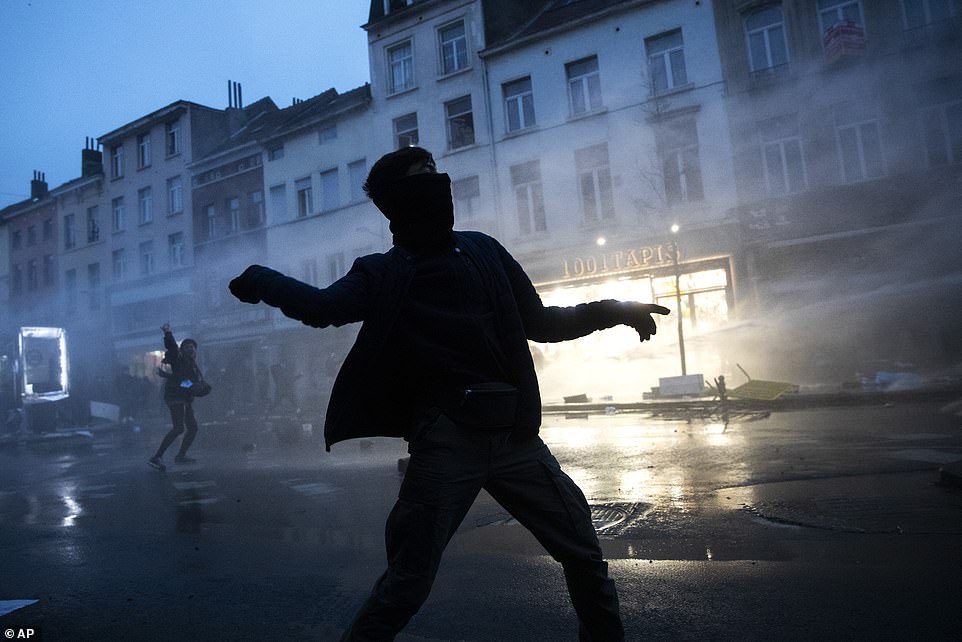 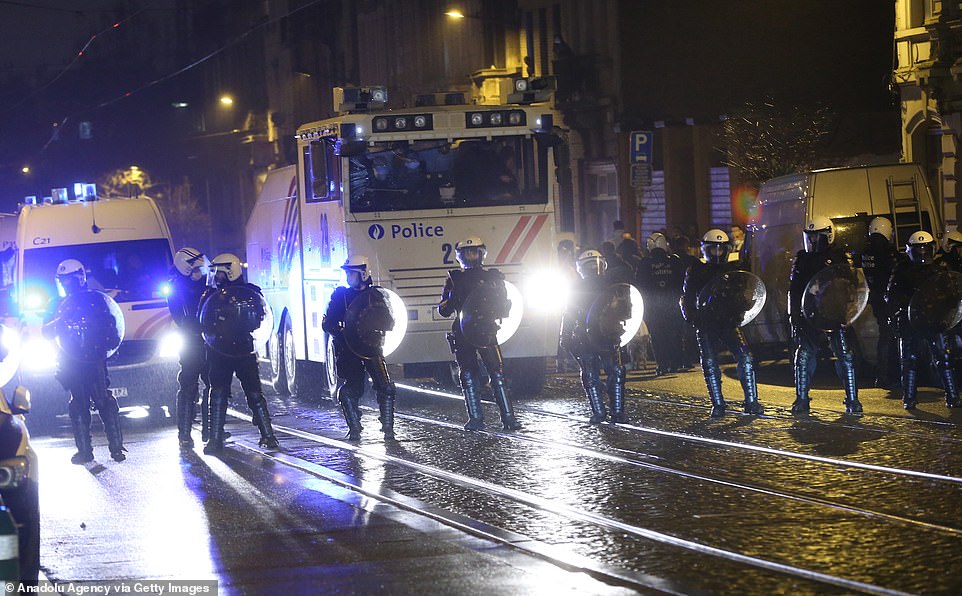 Justice Minister Vincent Van Quickenborne said on Twitter that police have ‘arrested more than 100 people amid the Wednesday clashes, with a reported 500 protesters demonstrating 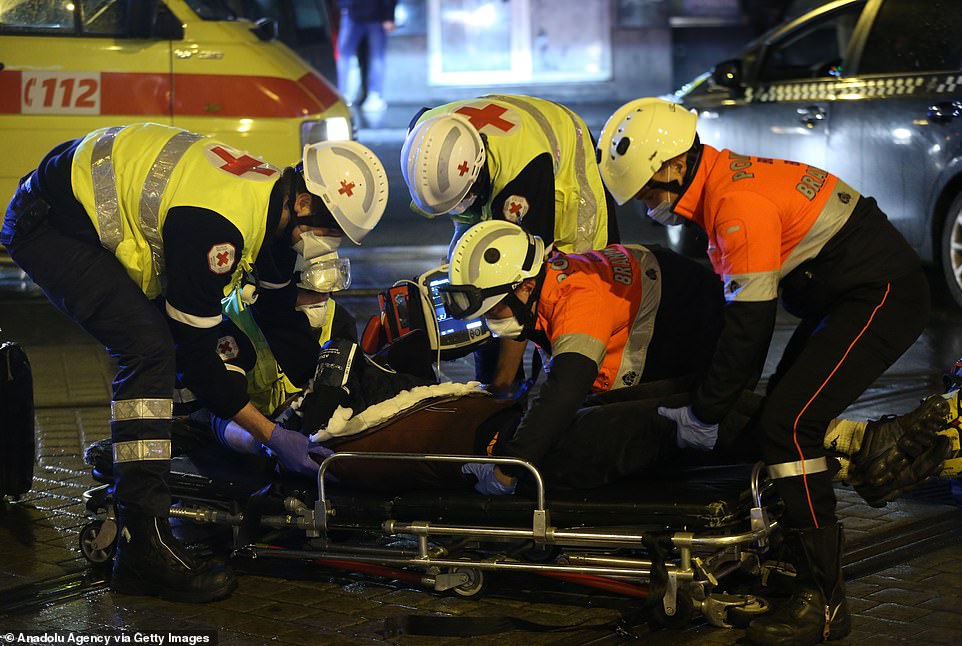 The prosecutor’s office said Belgium’s Comite P, an independent body overseeing police services, is investigating and a coroner has been appointed to perform an autopsy as well as toxicology tests.

Belgian media reported that Barrie had started to record the police with his smartphone on Saturday when officers decided to carry out an ID check on him.

The prosecutor’s office said it has seized video surveillance images, both from the police station and at the scene of the man’s arrest.

His family and lawyer met with the chief prosecutor on Wednesday morning. The prosecutor’s office said they were given guarantees that ‘all means are and will be implemented to shed light on what happened.’ 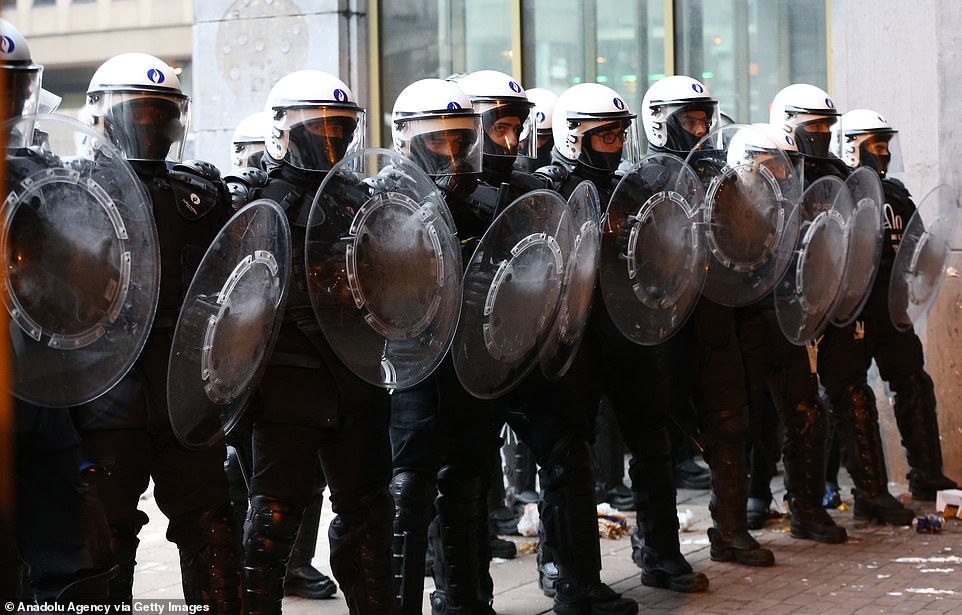 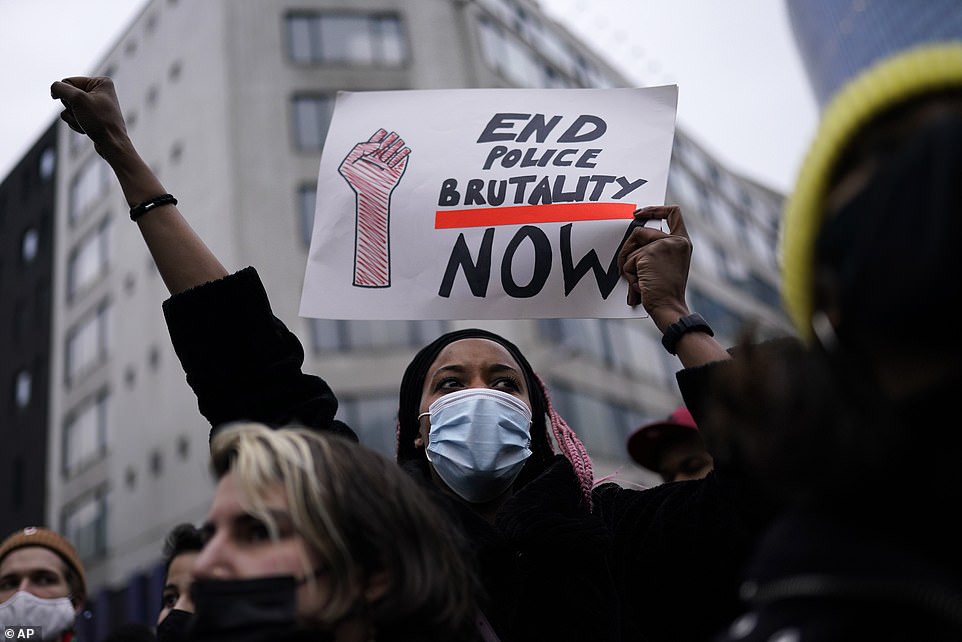 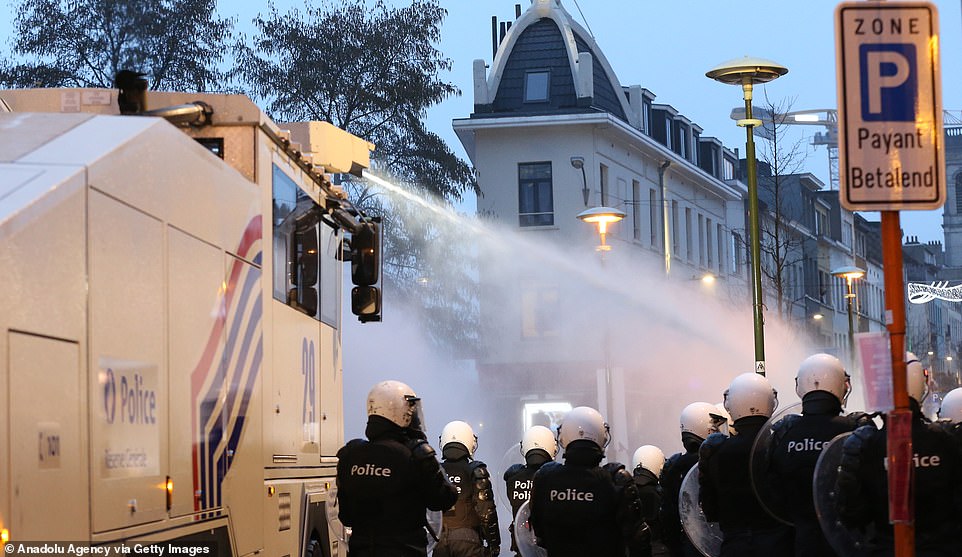 Interior Minister Annelies Verlinden condemned the man’s death and subsequent unrest as ‘totally unacceptable’ and assured the public over the investigation.

‘We will follow that up and, if necessary, take the necessary steps to also condemn misconduct by the police,’ Ms Verlinden said, as quoted by the Brussels Times.

‘But today, there is no reason to do so, and therefore there is certainly no reason for this kind of violence.’

Regions of Belgium that speak French have a 10 p.m. to 6 a.m. curfew while in Belgium’s Dutch-speaking region, the hours are midnight to 5 a.m.

Are YOU among the world’s richest one per cent?

Coronavirus: Israel yet to see effects of its vaccination programme

Are YOU among the world’s richest one per cent?

Coronavirus: Israel yet to see effects of its vaccination programme